Notice: Function wp_enqueue_script was called incorrectly. Scripts and styles should not be registered or enqueued until the wp_enqueue_scripts, admin_enqueue_scripts, or login_enqueue_scripts hooks. This notice was triggered by the fbShare handle. Please see Debugging in WordPress for more information. (This message was added in version 3.3.0.) in /www/webvol15/4b/3s0p235yco317zu/tsnok.se/public_html/sv/wp-includes/functions.php on line 5835
 The Coating | tsnoK 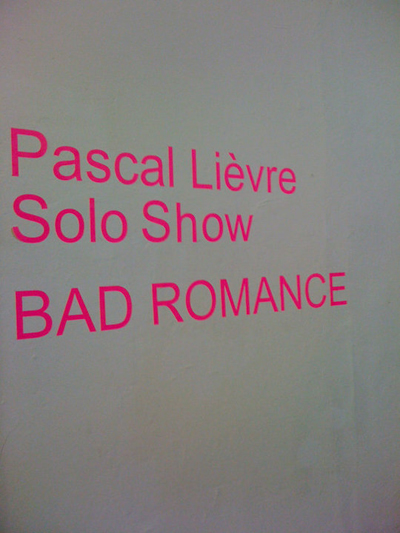 ‘He’s ten years older than those people of the night scribbling with their large felt purple marker on their Palace agenda: go to the drag queen show then the Warhol film and after that the Farida party. Go to bed 15h-18h. Black Night Blond Wig.’ Laurence Benaim, Yves Saint Laurent

Fireworks crackle through Bad Romance/Sad Romance like jewelry, in which artworks are sporting eveningwear. This new show by French artist Pascal Lièvre brings together paintings, photos, videos and one installation, relying on concepts that have made him a singular presence within the French art scene. Lièvre appropriates works from art’s higher realms, from Delacroix to… Murakami, from Michelangelo to Bourgeois, and others from mass culture, such as Hitchcock and Lady Gaga, which he empties in order to preserve the outline transforming it into a jar, a receptacle of new possibilities. In previous works this shucking of meaning produced a series of paintings made up of silhouettes filled with a specific color scheme highlighting its theme, such as ‘Made in France’ and its use of blue white and red. In his ‘politically pop’ videos, the melody remained while the lyrics quoted George W Bush (Patriotic) and Mao Tse Tung (Abba Mao). Bad Romance follows this process while adding a spectral dimension to the work. The playful quality of Lièvre’s art opens itself to a supplement haunting the space of the exhibition. From a selection of contemporary art’s departed figures, Michel Journiac, Barry Flanagan, Louise Bourgeois, all encountered in the first room, to the last one anticipating the death of a young Iraki woman, covered with a shroud while a voice from a video recites the words from Lady Gaga- I don’t want to be friends. 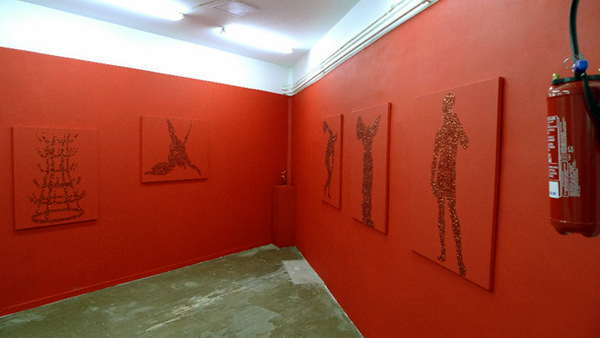 From THE BIRDS video in which only the shots of Hitchcock’s birds are preserved ( like his 2009 Where is Michael in which all moments of Michael Jackson were removed from his Thriller video), where man is absent from beginning to end, to the series Paris is Bourgeois with its giant spider seemingly laying eggs all across Paris, we are convened to a joyous moment of mourning. Joyous because the paint has been replaced by a glitter of spangles that gives life back to classic works too quickly trapped in museum stasis.

The glitter functions as a coating, as the grain of the painting, its glimmering skin. But no disco mirror ball here to make them shine brighter. Instead, reminders of a time when Bronski Beat and Margaret Thatcher lived in the same world, found in smaller collages and others videos in the show. What could have been a celebration of glam avatars turns into a ceremony, celebrated by three performers invited by the artist on the night of the opening. Performers with whom Pascal Lièvre didn’t interfere, who brought a bright queer Paris sparkle to the exhibition.

The singer Pierre Pascual, a robust bearded fellow with the eyes of a fawn, wearing tight shorts, black fish net stockings and Doc Martens, sang an acoustic medley of Eurythmics’ Sweet Dreams and Lady Gaga’s Bad Romance. A kind of soft and gentle Marilyn Manson. This was followed by the seductive giant Benjamin Dukhan, in full Lynch mode, a towering presence within the new Paris dance and performance scene, who occupied the red room (the paintings, the glitter, the walls), wearing two masks, that of a hare/lièvre and a pig, lip-synching like Dean Stockwell in Blue Velvet who’d have crossed over into the Dark Lodge. 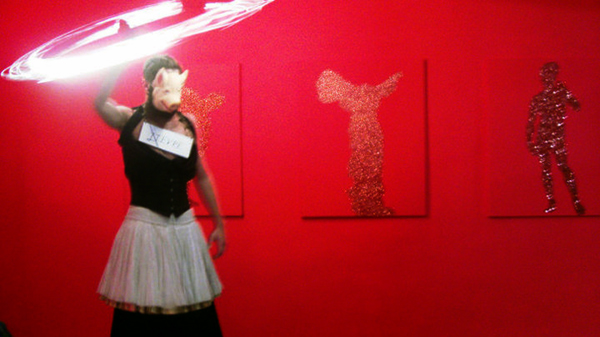 The final performance brought Pascal Lièvre and Michael Cros together in a remake of a famous scene from James Cameron’s Titanic, projected over the artists, in which DiCaprio draws a nude of Kate Winslet, with a shimmering blue pendant between her breasts, before becoming himself that same blue precious stone in the frozen waters of the ocean. This time Lièvre’s head served as the gem, coated with blue glitter. DiCaprio’s death, his sinking, a pop echo of a condemned love, that of the woman buried in the last room of the gallery.

The subtle intelligence winding its way through Bad Romance confers to each work a moral and passionate sense of our era. 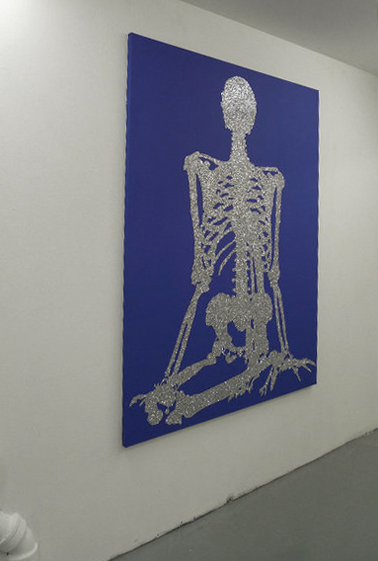