Notice: Function wp_enqueue_script was called incorrectly. Scripts and styles should not be registered or enqueued until the wp_enqueue_scripts, admin_enqueue_scripts, or login_enqueue_scripts hooks. This notice was triggered by the fbShare handle. Please see Debugging in WordPress for more information. (This message was added in version 3.3.0.) in /www/webvol15/4b/3s0p235yco317zu/tsnok.se/public_html/sv/wp-includes/functions.php on line 5835
 Faking it in Vienna | tsnoK

In the summer of 2016 MAK in Vienna shows a great exhibition about the work of the Austrian architect, curator and designer Friedrich Kiesler. It is similar to the exhibition that previously was shown at Tensta Konsthall in Stockholm, but works far better at MAK. Kiesler had visions, to say the least. He might be less known in comparison to his friend Buckminster Fuller, but his ideas were as advanced and futuristic as Fuller’s. Kiesler’s main project was Endless House and all the other buildings he designed and built, except for one – The Shrine of the Book in Jerusalem, which never was built. It was not possible to scale up his drawings and the models. His ideas about curating were as advanced as his architecture. The curating and design of the Surrealist Gallery including work of some friends (well known artists such as Jean Arp, Max Ernst, Salvador Dalí, Alberto Giacometti, Fernand Legér, Joan Miró, Pablo Picassso, Jackson Pollock and many more) can be described as a mix of futuristic interior design and a theater play with artworks in the leading roles. The pieces were mounted with a distance to the wall so that they appeared to hang freely in the air, they could be tilted in different directions and the spotlights would be turned on and off in order to individually highlight specific paintings. 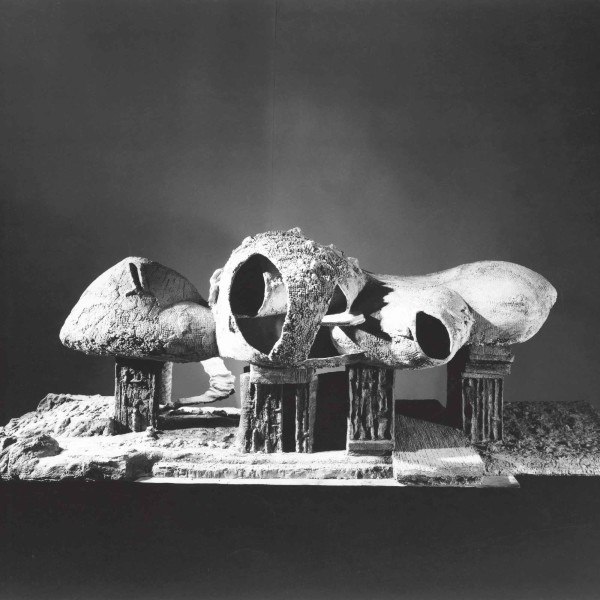 And Kiesler had art and exhibition ideas far beyond that. He was convinced that with television people would soon have the access to the collections of all the art museums in the world. This would render the museum buildings themselves obsolete. We haven’t seen this happen – yet. Perhaps television technology hasn’t been advanced enough and maybe people just haven’t been interested enough in the representation of famous paintings in place of the real deal. We simply seem to like to go to museums and experience unique originals. Maybe this will change.

In a recent web article the adjunct professor at the American University in Rome and founder of the Association for Research into Crimes Against Art, Noah Charney, described his visit to the Albertina Museum in Vienna earlier this year. The Albertina collections include a very special painting, Albrecht Dürer’s watercolour Young Hare from 1502. Charney didn’t have very much time and rushed through the museum to see the painting and then rushed out again. To his surprise he was later told that what he had seen was not the real painting, but a reproduction. The original is far too fragile to be shown in the museum. Of course this made me curious enough to visit the Albertina myself in order to museum to find out how the painting was presented.

The hare is, as Charney pointed out in his article, the star of the Vienna Art World. You will find huge plastic hare sculptures in bright colours at several places around the museum and in the museum shop you can find dozens of products with the famous painting. Probably I wasn’t the only one coming to see Dürers painting, but I was probably the only one coming specifically to see a reproduction. 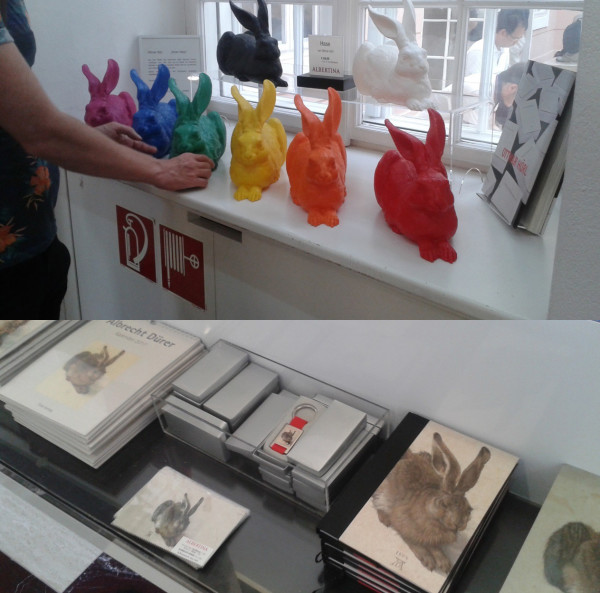 Since I wasn’t in a rush, I slowly moved through the museum from the bottom floor and up, moving through the “contemporary exhibition”, through the “Monet to Picasso” collection and so on, until I finally entered the Habsburg Staterooms. And there it was one of the walls. Not very dramatic but with several of Dürer’s other graphical works surrounding it. But they were all reproductions; not just the hare! It was in fact quite easy to see. Charney must really have been in a hurry to be fooled. They look the way flat as copies do, no Voght-Kampff test needed. After looking around a bit I actually found a sign telling the audience that it wasn’t the real work on the walls. Of course the sign was only in German and not too near the pieces: 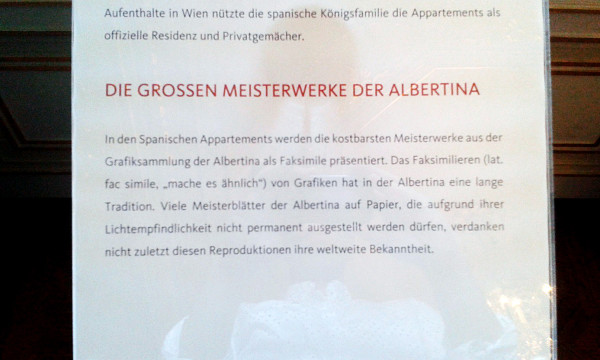 The sign is a kind of masterpiece itself, turning something that would embarrass most museum directors (the act of showing fakes instead of originals) into something exclusive. Just the use of Latin in the brackets! I left the museum with a smile on my lips.

My apartment is at Adamsgasse, a short street in parallel to Löwengasse. A few hours after my visit of the Albertina, I was on my way home from the closest grocery store on Löwengasse. I accidently passed a sign that immediately caught my interest: “FÄLSCHERMUSEUM  – MUSEUM OF FAKES”. Of course I went in. The lady at the counter tells me that they were closing in 30 minutes. I tell her that I will be a fast visitor, pay a reduced fee and pass the museum shop on the top floor to reach the stairs leading to the “museum” in the basement. It isn’t a huge museum, maybe 100 square metres. Around the walls you will find badly painted reproductions, fakes and photocopies of artworks. The Xerox is used a lot in this museum. I might remember wrongly, but I think about five different forgers were represented.  Some of them had made several contributions to the museum collection. Each of them was presented with a badly written and generic text. Funny enough these texts were copied and repeated several times, telling the same story about every single “art piece” in the museum. Art forgery is an interesting topic and a museum about fake art could be a good idea, but the Museum of Fakes in Vienna is simply – a fake.

A week later I decided to go to the Leopold Museum. After having spent a few weeks in Vienna I had grown pretty tired of the Gustaf Klimt cult but there was a dance festival going on and the website promised performances by both Tino Sehgal and Ian Kaler. In the museum there was absolutely no information about the performances, but there seemed to be some sort of a rehearsal going on where Kaler’s piece supposedly should be. There were people running back and forth with stage equipment, empty rooms with dark screens and shut down projectors. A piano player and a singer were rehearsing. Slightly irritated, I took the elevator to the top floor in order to walk down. The top floor is dedicated to Klimt so I strolled through the exhibition pretty steadfast including the part with the “studio” of the artist. The next level is dedicated entirely to Egon Schiele. On the floor there was a man laying in fetal position, gradually moving and obviously mimicking the distorted desperation in some of Schiele’s paintings. I decided that this must been the Tino Sehgal piece. After some minutes I walked into the next room and noted a wall with Schiele’s drawings. But wait a minute! Just a quick glance told me that something wasn´t quite right. Indeed, they were all copies – or as the Viennese museums like to call them “facsimiles”. And these ones were actually quiet badly made. There are colour shifts that shouldn’t be there, lines are blurred and the paper seems very wrong. The sign says “facsimiles”, just I expected. 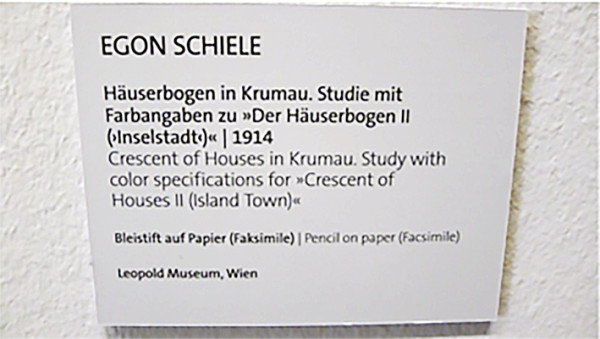 Suddenly I feel sick. Looking around everything in the museum seems flat and virtual. I look at the paintings, covered with glass that gives them that glossy surface which actually makes it impossible to get any kind of sense of the painting, let alone tell you if they are genuine or posters.

I need air and rush out if the museum, into the yard of the Museum Quartier and out to the Opernring. I need something to eat and buy myself an ice cream at one of the stands. Handing over the money I expect the whole stand to dissolve in front of my eyes as in Philip K. Dick’s novel Time Out of Joint:

“It’s happening to me again. The soft-drink stand fell into bits. Molecules. He saw the molecules, colorless, without qualities, that made it up. Then he saw through, into the space beyond it, he saw the hill behind, the trees and sky. He saw the soft-drink stand go out of existence, along with the counter man, the cash register, the big dispenser of orange drink, the taps for Coke and root beer, the ice-chests of bottles, the hot dog broiler, the jars of mustard, the shelves of cones, the row of heavy round metal lids under which were the different ice creams.” 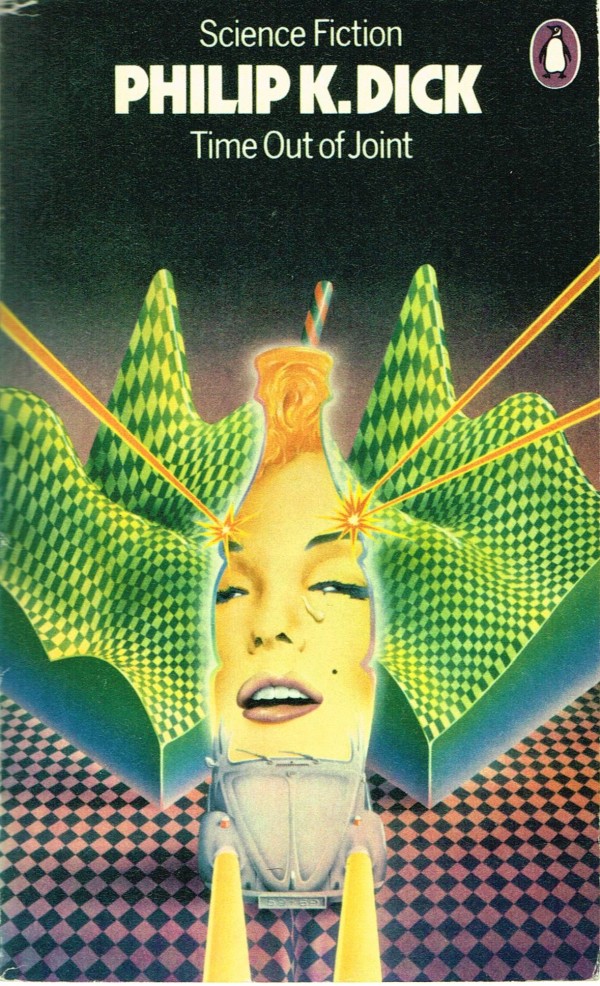 In August 2016 there is a Pokémon-Go party in the Vienna Stadtpark. Like in many other cities over the world the game is a huge hit. Pokémon-Go is the first augmented reality application that has attracted a huge audience and we have probably just seen the beginning as new technologies are developed. Somewhere in between 4000 and 5000 players showed up in the Vienna Stadtpark. Everyone concentrated and looking at the beautiful park through their telephones. It is an interesting phenomenon. Very much Philip K. Dick. The real world and the computer generated world melts together in the Pokémon-go application. The real and the not-so real. So what will then happen when the technology has developed a bit more and we instead of using the cell-phone screen use glasses or even lenses with the same ability to mix worlds, but with much better graphics? Will we come to a point where we will not be able to distinguish in between reality and animation? I wonder what Friedrich Kiesler would have thought of augmented reality and Pokémon-Go. Probably he would have nodded and said something about a near future “when we won’t need to visit the nature or the parks anymore, nor the museums. Anything in the world will be accessible through this new technology without leaving your home”. And I would then believe that he is right. Anyway it doesn’t really matter if we go to the museum buildings or not. The museums only show us copies anyway.